'Now's the time . . . let them go,' one of the deans said a few days ago. There we were, parents flanking our newly-accepted students to Suffolk University, ready to be unleashed in downtown Boston, (actually very near the graves of Paul Revere and Benjamin Franklin). The dean went on, 'Don't wake them up for work, don't do their laundry, stop reminding them of every detail . . . let them go. They will soon be here and on their own, so let them be independent now.'

For years, my son, Danny has wanted to go to school in Boston, and now he is getting his wish. He turned 21 a couple weeks ago, having just finished his general education at nearby Saddleback College, 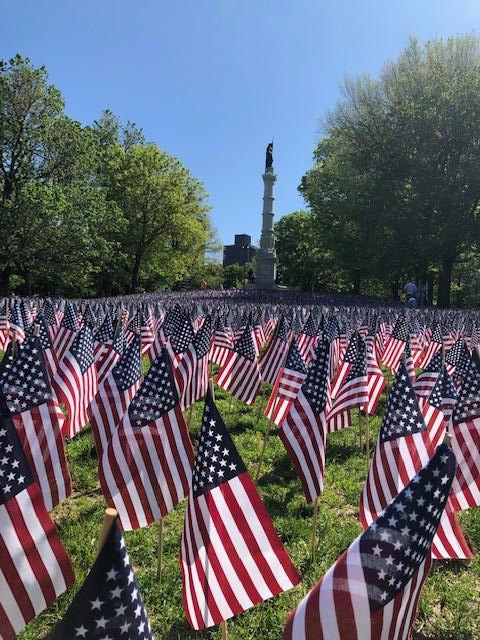 Memorial Day, Boston Common  and is so excited to be going to school practically   on Boston Common! So here I was, being   admonished by a stranger, to let (or is it   force?) my son to be independent - yes,   to stand on his own, which is good and   right. September 1 will be his official   Independence Day, but it starts now. This week Americans are to celebrate Independence Day, commemorating America's independence from Great Britain's tyranny. John Adams said this to Abigail, his wife, about the day: "It ought to be commemorated as the day of deliverance, by solemn acts of devotion to God Almighty. It ought to be solemnized with pomp and parade, with shows, games, sports, guns, bells, bonfires, and illuminations, from one end of this continent to the other, from this time forward forever more."1 In my town, residents and tourists alike flock to the beach to celebrate; they will surf, build sandcastles, barbecue and wait for the fireworks overhead at 9:00 pm. Picturing the scene in my mind as I have seen it so many years, the beaches on either side of San Clemente Pier will look like a colorful checkerboard quilt, made up of towels and umbrellas with space a premium! A day set aside to celebrate our independence ... from what, and for what? Originally, Europeans made their way to our shores to escape religious persecution and tyranny. For the most part, we are able to worship God freely in America. Thank you, God! And yet, we have taken that freedom for granted. I am so thankful I can worship God freely, brandish my Bible anywhere, and speak of my faith openly without using hushed tones. I do not want to ever take this freedom for granted - another reason to be praying for our country, elected officials and that people will be drawn to the truths of the gospel, the Lord we love. Regularly, I hear from believers around the world who do not have that freedom. Recently a minister friend in Pakistan requested prayer, and attached pictures of a Muslim convert to Christianity who had been shot seven times because of his faith in Jesus Christ. How will he support his family now? Almost daily folks carefully request to be added to the distribution of these briefings, ('carefully' because doing so could cause severe punishment). Are you aware of the persecution followers of Jesus Christ are facing in India, Myanmar (Burma), Saudi Arabia, Egypt, Iran, China and Nigeria, to name a few countries? An interesting note-many people in predominantly Muslim or Hindu nations are hostile to the term "Christian" because they see it as synonymous with "America" which they see as the portal to a great many evils in their societies-pornography, alcoholism, drug abuse, promiscuity, and divorce. Many want to know about Jesus-in fact, are hungry for Jesus, but are confused by 'Christian', since we call America a Christian nation. Hmmm . . . sad. My prayer for you today is that you will experience independence and also dependence. If you are bound by nicotine, alcohol, food, sex, guilt, shame or even worry, I pray that you will be set free! I think of what Jesus said, 'If the Son has set you free, you will be free indeed!'2 Picture the scene when Jesus stood up in the synagogue in Nazareth, rolled out the parchment from Isaiah, and read, 'The Spirit of the Lord is upon me because he has sent me . . . to set the oppressed free ...Today this Scripture is fulfilled in your hearing.'3 The Freedom Maker had come! He still comes to you and me-offering us freedom . . . freedom from what binds us, freedom FROM ourselves, but not to be self-reliant, but God-reliant, God dependent. Where do you find yourself today along the pathway to independence and dependence? Set us free, Jesus! We want to be free indeed, but free to be dependent on you, God. Happy Independence Day! And Happy Dependence Day, too. Christine

He knows your name.

What do you do with open doors?

Courage for the New Year.