The Devoted: The Golden State Warriors and you!

The Devoted: The Golden State Warriors and you!

Oakland, California, was a good place to be from, not of.  I waterskied in her estuary and bay, took the no. 51 bus to Emporium Capwell, but navigated her carefully; she was rough. I watched as the Oakland Coliseum was built, and at a young age, became both an Athletics and a Warriors' fan.  Today's Golden State Warriors make Oakland a great place to be of.  Heading for the NBA Finals for the fifth year in a row, their devotion as a team screams loudly-especially in one Stephen Curry.  Man, is he fun to watch, but there's more...  read on.

Devotion- there it is again.  Thinking about it, our devotion defines us.

The Hebrew noun (think Old Testament) for devoted is herem, as in this verse:

~>Let your heart therefore be wholly devoted to the Lord our God,

Friends, the. greatest. hope. of. the. future. is. Godly devotion - particularly in the next generation.  I know you will be inspired by four standouts devoted to God.

First, Brian.  I have known Brian Ivie since he was a baby.  While I could fill several pages about him, I should like to point toward how God has used and shaped his devotion.  Simply, he was first devoted to film, making what we would call 'home movies' at a very young age, using neighborhood friends, settings, pieced-together costumes and sets.  His focused passion led him to film school at USC, but while there, God intersected his path . . . and a new devotion took root in Brian.

Love of God merged with love of movie making and

his God-given purpose was born: making movies to present the gospel.

The Blues Brothers would certainly say Brian is on a mission from God; his mission, should he choose to accept it, and he has, is to return the faith that has been stolen from Hollywood.

His latest movie, Emanuel, is more than a work of art; it is a story of redemption and the power of forgiveness.  It is the Gospel on the big screen, substantive hope for our racial divide.  While the movie is about the shooting at Emanuel African Methodist Episcopal Church (aka Mother Emanuel) of Charleston, South Carolina, which claimed the lives of nine (black) people in a Wednesday night prayer meeting1, the real story is how their loved ones chose to forgive the young (white) shooter2,3.

~>Forgiveness is the currency of grace, flowing from the amazing love of God.

I had the privilege of attending a private screening of Emanuel, and marveled at the heart behind the talent of the young filmmaker, Brian Ivie4, who got the movie made against all odds.  Why? Because he is devoted to God, and so is Steph Curry,

who is a co-executive producer with 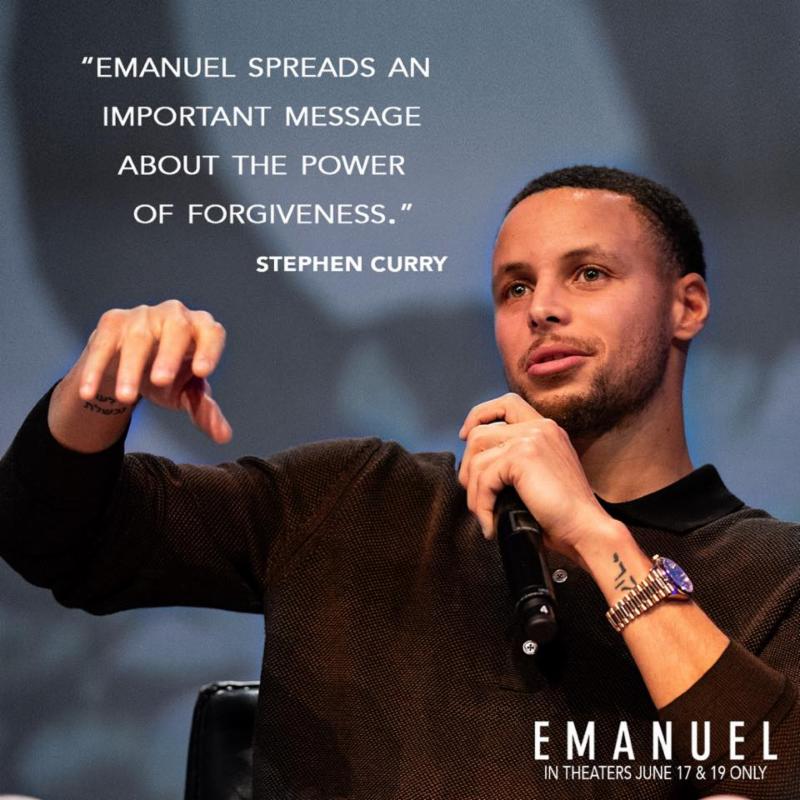 Viola Davis on the film.  Watch the

it is powerful.   Get your tickets

for a theatre near you; tell your friends ~

I am filled with hope for the future because of the godly devotion of these.

The devoted:  Steph Curry, who is courageously standing for God, leading his teammates to God, and mightily impacting the NBA5,6.

The devoted:  Brian Ivie, using his creative talent to turn hearts and minds to the transforming power of the Gospel which is able to redeem even social injustices

The devoted: the brave people of Emanuel, who by the Holy Spirit of God, were able to forgive.

Go get 'em, Brian . . . go get 'em, Steph and the Golden State Warriors.  I will be wearing my blue and gold and cheering you on!  And Charleston ~ I'll see you on the four-year anniversary of that fateful night, and I'll be praying that God will continue to heal and restore you, and use your story to move across America.

3 - 'I forgive you' - video stranger than fiction - https://www.theguardian.com/world/2015/jun/19/i-forgive-you-charleston-church-victims-families-confront-suspect

When God seems A.W.O.L. . . . . listen to podcast: https://www.pastorwoman.net/podcast/episode/23e6a9fd/when-god-seems-awol-colossians-42-may-20-2019 Have you ever felt like God has packed his bags an