Funny who you meet at the market!

Can you imagine trading in the market and striking up a conversation over eggplant with this guy who tells you he's the brother of Jesus?  I mean, you live around the Galilee and you've heard about the rabbi who talks like no. one. else. ever... who does miraculous things.  But now you're picking up dinner fixings and you meet his brother.  Dang, now that's unusual.

Over your right shoulder you say, "So, I heard Jesus healed a blind man the other day--what's it like being his brother?"

What would his brother have likely answered?

"He's nothing special--just like one of us.  In fact, I really don't believe the claims that are being made about him. I grew up with him--he puts his sandals on just like you and me. . ."

It is true. . . Jesus' brothers did not believe in Him. [John 7.5 For even his own brothers did not believe in him.]. Yet, open your Bible to the book of James, and read how James, the brother of Jesus identified himself, as 'a servant of God, and of the Lord Jesus Christ.'  What changed, for him to go from not believing in the divinity of Jesus, to calling himself 'the servant of Jesus Christ?'

Jesus' family and followers saw him crucified and buried, then saw him walking around after he rose from the dead, just as he had said he would. Acts 1.3: "After his suffering, he showed himself to these men and gave them many convincing proofs that he was alive. He appeared to them over a period of 40 days and spoke about the kingdom of God."  Paul tells us that among those that Jesus appeared to after his resurrection was James, his brother.  [1 Corinthians 15.7]

The early Church was built on the irrefutable, historical event of the resurrection of Jesus Christ.  You see, 'The resurrection "was the belief that turned heartbroken followers of a crucified rabbi into the courageous witnesses and martyrs of the early church."*  People do not willingly die for a lie - and of Jesus' apostles, all were martyred, except for John, who was exiled.

Back to being the sibling of Jesus--I've thought a lot about what that would have been like.  What do you think his brothers knew . . . and when?

Surely Joseph and Mary would have told their children about the angels' messages to them of the coming miraculous birth of the Messiah--about the shepherds and eventually the Wise men coming . . . about when they found Jesus in the temple, teaching, at age 12 . . . or did they?

Was Jesus patient when Joseph was teaching him carpentry/masonry skills, or did he let him know he really wasn't going to have much use for those skills?

~I wonder if he hollered when he hurt himself . . .

~Did he have a far-away look on his face when he prayed to his Father?

~Did they ever catch him looking at 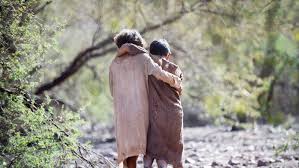 the colors of a lily, or the beauty in an

olive tree, while he was thinking,

~Did the siblings know when they saw

their cousin, John, that he would be

a wild man for Jesus?  Hmmm.

James decided a living Savior, (all right--who happened to have been his brother!), was worth staking life his on, was worthy of his lifelong service.  What a turnaround in James - from unbeliever to sold-out servant of Jesus Christ.  Only one thing could account for such a miraculous change: he encountered the risen Lord and believed that Jesus is and was, who he said he was, the Son of God.

Ponder what it might have been like growing up with the Messiah, then seeing arguably the best guy you've ever known tortured and murdered... it is a crazy scenario for sure, but it is also true.  James, the half-brother of Jesus is radically changed by seeing Jesus alive, after he saw him very dead.  Let's learn from the man's practical wisdom together.

* - More Than A Carpenter, Josh McDowell