Since I know you do NOT want to be mediocre . . . besides Peter who was unstoppable, how about this guy?

He was born to a strict Pharisee father, trained as a "Hebrew of the Hebrews." Being from Tarsus, a city that teemed with commerce and power, young Paul observed the ways of Roman soldiers, as well as business men who came and went through his city. Since all young Jewish men were expected to learn a trade, Paul learned the trade of tent-making, the principal trade of Tarsus. However, his keen mind and serious disposition suited him well for training as a rabbi.  About 13 years of age, Paul moved to Jerusalem to study under Gamaliel, the most highly respected teacher of the day.  Clearly an articulate communicator, Paul wrote 13, count-em 13, New Testament books, outlining freedom in Christ.

No matter what came at him, the man did not quit.

It all started when Jesus stepped into his path while he was traveling to Damascus to arrest and prosecute 'Christians'.  He was immediately convinced that Jesus was indeed the Messiah of whom he read in the Old Testament scriptures. His passion turned then to telling others of Jesus Christ, who died on the cross for even his sins, no matter what it cost him - even when his life was threatened, and was ultimately demanded of him.

On the other hand, there's me -- call me crazy, but I'm not fond of physical pain, particularly when I can help it!  Now it is one thing when I willfully push through a strenuous workout; when I have a tooth drilled, that is another . . . but both are by choice and for personal health gain, right?  I'm no rocket scientist, but at a young age when I learned, 'if I do this thing ____ and it hurts, I don't do that thing anymore!'  So what in the world was wrong with Paul?

People proudly drive beautiful, expensive cars, brag about big business deals and boast of big bank accounts and 401-Ks, right?  Yet Paul boasted about something very different.  He writes about his lineage, "What anyone else dares to boast about - I am speaking as a fool - I also dare to boast about.  Are they Hebrews? So am I. Are they Israelites? So am I. Are they Abraham's descendants? So am I."  His ancestry had been critically important to Paul.

Then Paul 'boasts' about serving the cause of Christ; note, this is a totally different thing.  One might say he was upside down in his thinking.  He writes, "Are they servants of Christ? I am more. I have worked much harder, been in prison more frequently, been flogged more severely, and been exposed to death again and again.  Five times I received from the Jews the forty lashes minus one.  Three times I was beaten with rods, once I was stoned, three times I was shipwrecked, I spent a night and a day in the open sea, I have been constantly on the move. I have been in danger from rivers, in danger from bandits, in danger from my own countrymen, in danger from Gentiles; in danger in the city, in danger in the country, in danger at sea; and in danger from false brothers.   I have labored and toiled and have often gone without sleep; I have known hunger and thirst and have often gone without food; I have been cold and naked . . .   If I must boast, I will boast of the things that show my weakness.  The God and Father of the Lord Jesus, who is to be praised forever, knows that I am not lying."   from 2 Corinthians 11

Who doesn't run from that which causes great physical pain and harm?  Instead, he runs toward it to take the gospel to those who did not know!  He counts his life nothing in trade for telling others about Jesus.

Who brags about how many times they have been severely beaten or repeatedly jailed-particularly a religious person?  Only one who would give his all for the One who gave his ALL for him.

I pray that God will light a fire in you and me to stop at nothing to give another the great gift of  life forever in Jesus Christ. Yes, like Paul, I want to have an indomitable spirit, especially when it comes to loving God, loving others and pointing them toward him!

~> Want to Journey in the Footsteps of Paul with me? 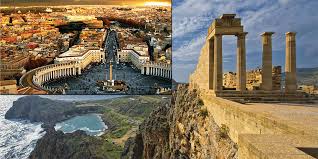 The most important question.

Because we all could use a helping of this!

This is the journey of a lifetime and you are invited.